Among two of my friends, I earned eternal suspicion regarding my sanity.

It happened during those carefree kortbroek days of cycling around the harbour, watching ships pass and cargowork close up. Now you have to have a very good reason even to enter the docks and wannabe harbour entrants (including ships’ agents, would you believe) have to undergo an “orientation course”….oh, such bureaucracy that keeps young people from the ships and from learning far more in the process than they would in a school classroom.

Back to my story that was set in 1958. We had pedalled to the harbour to watch the launching of the fisheries research vessel Sardinops that had been built in the Globe Shipyard adjacent to Cape Town’s Yacht Basin. The small yard built a number of other craft, including the Robben Island cargo ferry Blouberg in 1957 (the first to be built in the Globe yard), and, in 1962, two pilot launches, A.C. Craigie for service in Cape Town, and H.T.V. Horner that I think went to East London to replace the fairly ancient pilot tug Mary that had been ferrying pilots at the Buffalo River since 1902. Several other pilot launches, fishing vessels, and diamond recovery vessels were also built or modified there.

Sardinops was to be launched “Liberty Ship Style”, i.e. beam on, into the yacht basin. However, there was a long delay. As we were watching from M Berth, we were not privy to activities at the launching site, and hence had to wait, and wait…my friends growing increasingly irritable at the delay, especially as, if I recall correctly, the south-easter was increasing in velocity.

Finally, she slid down the ways, hitting the water with a huge splash, and setting up a mini-tsunami across the yacht basin. “Now we can go home,” groaned one of the friends with relief, unimpressed by the action he had witnessed. Perhaps he might have been impressed if he had realised that the vessel would serve the fisheries folks for more than 50 winters.

My latest sortie into shipbuilding in the extensive Daewoo shipyard in Goeje in south-eastern Korea – at the invitation of the Teekay Corporation of Vancouver – was at a different level. Of Teekay’s order of seven 173400-cubic-metre LNG carriers from the yard, Creole Spirit and Oak Spirit have been delivered and are on five-year charters to Houston-based Cheniere Energy.

I travelled to the Daewoo Shipyard for the naming ceremony of Teekay LNG’s third vessel in the series, the 295-metre Torben Spirit. Towards the end of the programme, Yumi Karlshoej, the 23-year-old daughter of the late tanker owner, Torben Karlshoej, took to the podium. “I name this ship Torben Spirit,” she announced in a clear, strong voice. The champagne bottle crashed against the side of the gas carrier, cheers rang out, and the ship’s foghorn boomed over the shipyard. The LNG carrier was delivered at the end of February, and currently is on passage to the US Gulf via Panama to load her first cargo. Using boil-off gas from her cargo tanks, her steam turbines push her along at 19.5 knots. 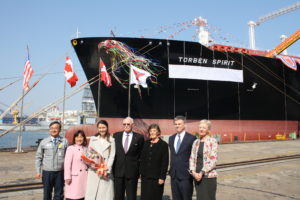 The Teekay Corporation, of which Teekay LNG is a part, owes its origin to the foresight and hard work of a former Danish farm boy, Torben Karlshoej who emigrated to the US as a teenager. After several disappointments, he finally struck the right formula from which emerged a very successful tanker operation, based initially in Long Beach, California, and later in Vancouver, Canada, the company’s long-standing headquarters.

Two disasters hit Karlshoej’s growing company. The first was a financial challenge when the prices of tankers he had ordered from a Japanese shipyard increased in Yen terms, and Karlshoej faced possible bankruptcy. However, once the new tankers were in service, he reasoned, he would be able to repay the banks who had lent him the money to build the vessels. His impeccable record with his bankers saved the day and repayments on the debts were rescheduled.

Only months later, one of his tankers, Nagasaki Spirit, collided with an erratically-steering containership in the Straits of Malacca. (Investigators later thought that the containership had been hijacked by pirates, hence her erratic steering.) A massive fireball engulfed both ships, killing all but two of Nagasaki Spirit’s crew. As a shipowner who knew and cared about his crews, the loss of life staggered Karlshoej, and obviously added immensely to his already high stress level.

When his daughter Yumi named the company’s latest gas carrier in his honour in the Daewoo yard, it was a very special, poignant moment for she had never met her father. Indeed, when her mother Aiko told her husband Torben the exciting news that she was expecting Yumi, he was delighted. Tragically, he passed away suddenly later that night.

The news of his passing spread rapidly through global shipping circles and many believed that Teekay would be sold off following his death. “This will be like a fire salvage sale,” wrote a contemporary shipping reporter. His foresighted brother, Axel, and a small group of friends thought otherwise. “Teekay is not for sale,” Axel responded adamantly “My brother’s dream will live on, and it’s business as usual.”

Teekay’s subsequent phenomenal growth propelled it to become one of the leading operators in the tanker, offshore and gas sectors.

Like all shipping companies, Teekay has weathered the decade-long downturn in the oil industry, but, amid a more positive forecast for the gas sector, the state-of-the-art Torben Spirit and her sisterships have secured good lengthy charters.

Another series of remarkable 172600-cubic-metre LNG carriers is also under construction for Teekay LNG in the Daewoo yard. With these specially ice-strengthened ships, the company will participate in the shipment of LNG from the gasfield on the Yamal Peninsula in Arctic Russia. A new town and port, Sabetta, has been constructed to facilitate the export of LNG to China via the north-east passage during the Arctic summer, and to Zeebrugge in Belgium where it will be trans-shipped to conventional LNG carriers for movement to China.

The world’s first ice class LNG carrier, Sovcomflot’s Christophe de Margerie, left the Daewoo Shipyard late last year, loaded a small test cargo of LNG at Zeebrugge, Belgium, and  berthed at the northern Russian port of Murmansk in February. At the time of writing, she was undergoing ice trials amid Arctic sea conditions. Teekay’s first vessel of this class, Eduard Toll, will enter service within months, and the second, Rudolf Samoylovich, by the end of the year. Another four Teekay vessels will follow for the Yamal LNG project.

The $27-billion Yamal LNG project is expected to produce 16.5 million metric tons of LNG annually which represents a big impact for future global LNG supply, and its shipment to areas of demand, mainly in Asia. Teekay’s vessels that are involved in this project have 25-year charters, absolving them from the fickle nature of the charter markets.

To see the vast scale of shipbuilding operations in Korea was an eye-opening experience, especially as I noted that the Daewoo yard had begun business 44 years ago. These thoughts morphed into wondering why South Africa has not embarked on larger shipbuilding projects over the years. It looked promising up to about 1989 when Durban yards were turning out ships for Unicorn, the Navy and other clients, but the scale of current local shipbuilding has hardly changed from that which I witnessed as a kortbroek nearly 60 years ago.

If the Koreans can do it, why can’t South Africans?

SOME DESIGN FEATURES OF THE ARCTIC-CLASS LNG CARRIERS

To move LNG from the Yamal field, the Arctic-class LNG carriers are designed with polar conditions in mind, and also to enable their operation should something go wrong in that inhospitable region.

Their design includes the usual Maierform ice-breaker bow to break a passage through thinner ice, while an interesting concept has been applied and upgraded to cope with thicker ice.. Driving each LNG carrier are three specially-designed azipods at the stern. When ice of up to 2.1 metres is encountered, the vessel is turned, she is conned from an aft-facing wheelhouse, and the ice is broken using the azipods. This technology has been used in merchant ships for at least 15 years. Finnish-built Aframax tankers and Russian container/cargo ships pioneered its use for ice-breaking, and Russian owners took delivery of tankers with azipods for use in the ice. In all these ships, no major overhaul of an azipod has been needed which is welcome news, given the taxing physical conditions under which the ships operate in the Arctic.

The ships’ maintenance programme takes into account the anticipated significant wear and tear that will occur during polar operation. For the main engines, engine manufacturer Wartsila has developed systems to avoid doing maintenance in the ice, which differs from conventional ships for which continual maintenance needs to be done.  If one azipod is damaged, the ships can operate on two, and spare azipod blades are carried onboard. Blade replacement can be done without drydocking the ship.

To limit the effects of an accident, the ships’ architects have allowed for a high level of redundancy for the ships’ propulsion and cargo systems.  A bulkhead divides the engineroom area into two parts to allow the ship to continue operating at 75 percent of her maximum power in case of fire in or flooding of one of those engineroom compartments.

These are highly sophisticated ships, custom-built for Arctic conditions, and are in keeping with Teekay’s quest to be at the forefront of ship design and operation.

Sailing Into a Climate-challenged Future – An Oceanic Awakening