Home Ports Port of Maputo Entrance Channel Dredged to up to -14.4 meters (CD) 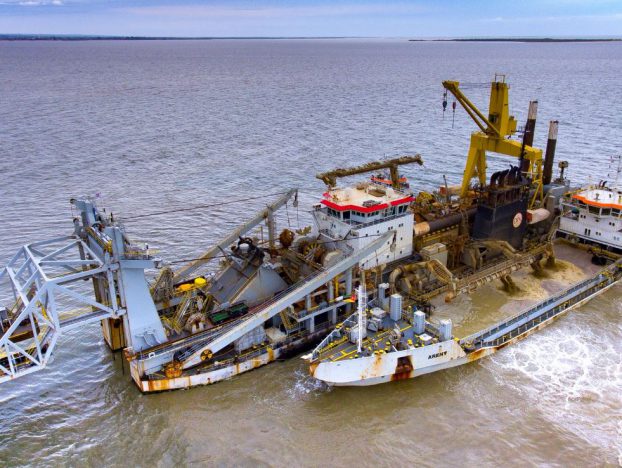 The dredging of the access channel to the port of Maputo from 11 to up 14.4 metres (Chart datum) has been completed.

The official completion was highlighted on a ceremony held on 10 February 2017 at the Port of Maputo with the presence of the Minister of Transports and Communications, Eng. Carlos Alberto Mesquita.

“Those three additional meters allow us today to affirm, with pride, that we are a port prepared to receive capesize ships”, said Osório Lucas, CEO at Maputo Port Development Company (MPDC). “Until very recently, these same ships had to make double stops, one in our port and another in another port of the region, or even be diverted to neighboring ports.”, he added.

Osório Lucas, Executive Director of the MPDC, said during the ceremony that marked the completion of the channel dredging that the idea behind the investments was to transform the port of Maputo “not into an alternative port but into a port of choice.”

“The additional three-metre depth of the access channel allows us to say that Maputo now has a port prepared to receive larger ships,” said Lucas, who added that a ship with a draft of 12.9 metres left the port last week without having to wait for the tide, which could not happen before.

The Minister of Transport and Communications, Carlos Mesquita, affirmed: “As a result of the investments we are making, Maputo Port has gained a prominent place in the region, placing the hinterland closer to the main international sea routes, consolidating its complementary position to the South African ports of Durban and Richard’s Bay.”

Nevertheless, the Minister underlined that the efforts of investment at the port have to be corresponded by equal investments in the logistics operators. “We urge that there be speed in the reform of the rail system to give vent to the volumes of cargo that will demand the Port of Maputo. It is not enough to transport this cargo: it is necessary to do it with efficiency, security and reliability”, he affirmed. “It is imperative to find partnerships between the various players in the chain and efficient and competitive logistics solutions”, he added.

The deepening dredging of the Maputo Port channel, awarded to international company Jan de Nul Dredging Middle East FZE, started in May and was completed in late December 2016, almost three months before the deadline. With three dredgers in operation, and a series of other equipment, it removed about 14.5 million cubic metres of sediment and rock material.

The total cost of the work was US$84.1 million, obtained through loans from Banco Comercial e de Investimentos (BCI) and Standard Bank and the MPDC’s own funds.

Alongside the channel dredging, Maputo Port has recently commenced with the provision of bunkering services to all vessels, moored or at anchorage. The supply of fuels and lubricants are being carried out under an agreement between MPDC and Petromoc Bunkering and is part of a series of initiatives aimed at improving the services offered to shipping lines by the port, making it more competitive in the regional and international markets.

Rehabilitation of quays 6, 7 and 8 – a project developed alongside dredging to provide deep water berths – is currently under evaluation and is due to happen by 2017. These developments will provide deep-water berths to enable the port to respond to the growing demand also significantly increasing annual throughput.